Home » kids » picky eaters — how to make spaghetti for a toddler
0 shares
Disclosure: *This post may include affiliate links. As an affiliate, I earn from qualifying purchases. 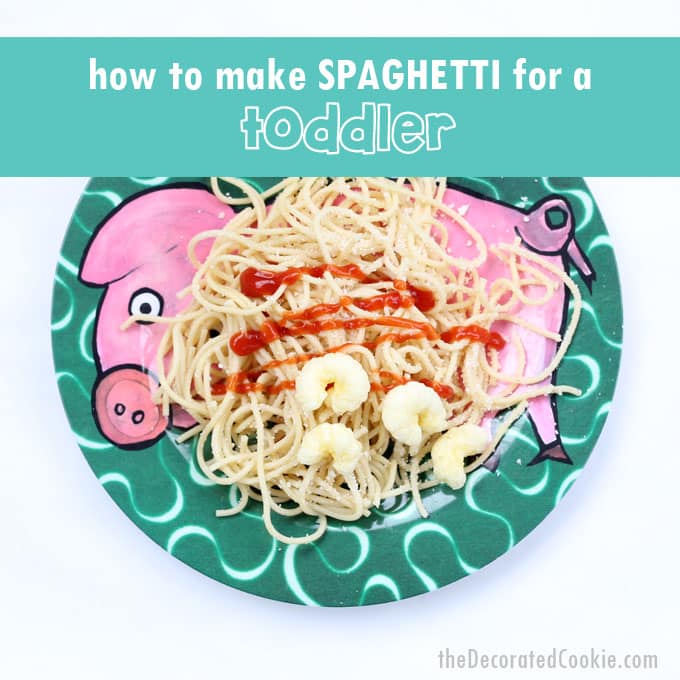 Just to preempt any emails scolding my parenting, I promise I do NOT go to these lengths to serve my children dinner. It’s exaggeration for comedic effect. Although… not that much exaggerating, admittedly. I have two picky eaters, and I do accommodate them more than I “should,” I suppose. (“Should” in quotation marks signifies the unsolicited advice I get about what I’m not doing right, parenting-wise.) Correction, I believe I have one truly picky eater in the 9 year old and one wants-to-be-like-her-sister 4 year old that isn’t really picky but pretends she is.

I don’t understand this picky eating thing, so I’ll have to blame my husband’s genes. When I was a kid, I would eat anything. Seriously, any new food put in front of me was a welcome challenge. I was the only one in my house who loved all sea food of any kind–that’s what the Jersey shore does to you–which meant I always ordered sea food in restaurants, my only chance to have something adventurous. (An oft-told story is when, at age five, my grandmother introduced me to shrimp. She brought me some shrimp cocktail from her buffet and I devoured it. Busy in adult conversation, no one at the table noticed I had eaten all my shrimp. When they finally turned to me, they questioned where the tails were. “I ate them,” I said. “Did you like them!?” they asked. I didn’t like that part. They were too crunchy. But I ate them to not hurt my grandmother’s feelings. I mean, I was five. I didn’t know the proper way to eat shrimp.) My taste buds were just not the hindrance they seem to be for my kids.

Before I had my own children, I made the standard declarations. “I wouldn’t tolerate a picky eater.” “I’m not going to be a short order cook.” “My child will eat what I serve, or she’ll starve.” Then I had a picky eater who really would starve instead of eating a bite of mashed potato. Life almost never turns out as neatly as we envision it, right? And so, admittedly, I accommodate her a bit. Despite not understanding the picky eating thing, I do sympathize with what really seems like revulsion when she eats certain foods. Fortunately, she’s a healthy eater, (rice, plain pasta, steamed broccoli and Brussels Sprouts, and cucumber are on her short list of acceptable foods) and it isn’t too difficult to accommodate. Making a rice dish? Set aside some plain rice. Spaghetti night? Just portion out some without sauce. Anything mushy or saucy? Keep it away. Far away. And for the love of…. do NOT put a grain of pepper on anything.

As a parent, you learn to make compromises so your family life functions as best as it can, and you inevitably end up making decisions that others may be quick to judge (hey, I’m a judger, too, so I don’t judge you for judging). But I know my house and my kids better than anyone else in the entire world, so I’m taking my own advice on this one and laying off the picky eating problem. And if it’s a mistake, well, then it’s one mistake I’m making hidden in a million other awesome parenting things I do.  Besides, I figure whatever I’m doing wrong now, they can just work out in therapy later. (Kiiiiiidding.)