Home » How To's » supplies » edible writers » Presidents Day marshmallows
Disclosure: *This post may include affiliate links. As an affiliate, I earn from qualifying purchases. 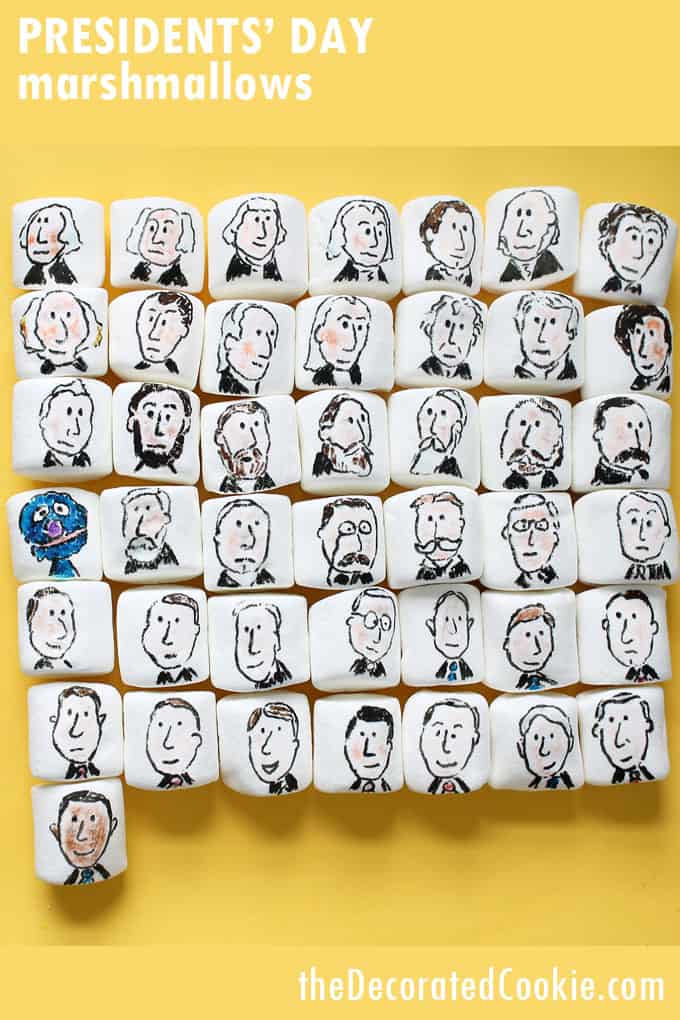 Here’s someone with too much time on her hands, perhaps you are thinking. And yet, I’m someone who never has time. I’m so used to rushing that I act like I’m in a hurry even when I’m not in a hurry.  I can change my daughter’s diaper while typing a blog post while on a conference call while folding laundry with my feet before rushing out to pick up my other kid from Jiu-Jitsu, and then posting on facebook what I just accomplished for the accolades and martyrdom, because come on, it’s pretty impressive, and I want people to know. So how I sit and draw 43 presidents on 43 marshmallows (Grover Cleveland only got one marshmallow) for Presidents Day is a mystery even to me. But it’s easier to sit and draw on marshmallows than to do all of that other stuff. So I made Presidents Day marshmallows.

Note that I made these marshmallows years ago, before our current president was elected. But not to fear. I also have Trump marshmallows. 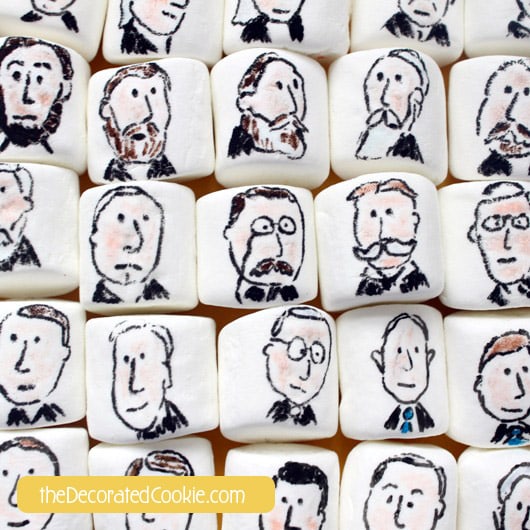 Drawing the lot of them brought me back to learning the list of Presidents in junior high school history class.  Sure, you’ve got FDR and Ike, JFK, LBJ and Carter, the classics like Washington and Adams (father AND son) and Lincoln. But what about poor William Henry Harrison who died a month into his presidency, or that crazy bachelor Buchanan. And that silly Chester A. Arthur who compulsively changed his pants. Or William “Never on a Diet” Taft. And don’t get me started about Warren G. Harding gambling away the White House china. And Millard Fillmore, who… is named Millard, which is pretty interesting. 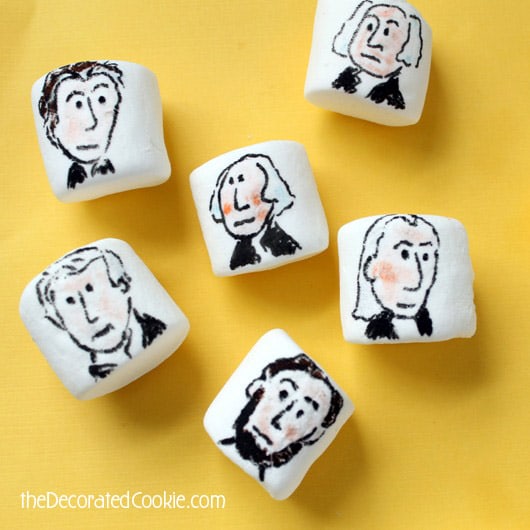 There’s a new level of intimacy I feel with each president having spent this time with each. Calvin Coolidge seems like a lovely man. Andrew Jackson is downright scary. I think Polk came back to life as the Wizard of Oz. And I bet Martin Van Buren would be a crazy party guest, but I think Rutherford B. Hayes would be the one to call the cops.  FDR looks like he really cares. I’d want him in my corner.

There are quite a few mustachioed presidents. 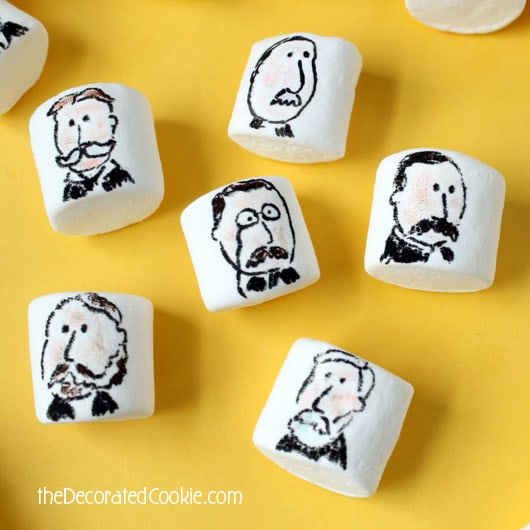 I also kind of wanted to do this. 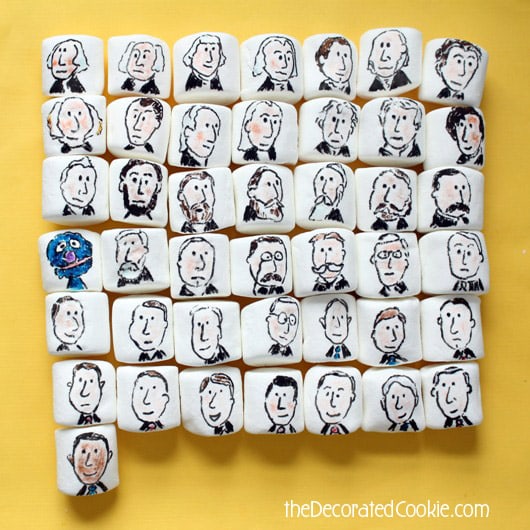 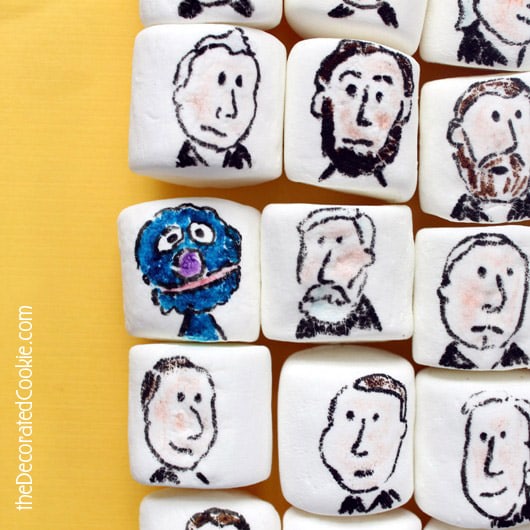 And with all due respect to our presidents, I pretty much drew the same figure over and over again, especially for the first 25 or so presidents. Seriously, America, we are painfully slow at accepting diversity. Painfully. I was thankful to finally get to Obama. My daughter asked if there were any girl presidents. It’s time to change that, too. 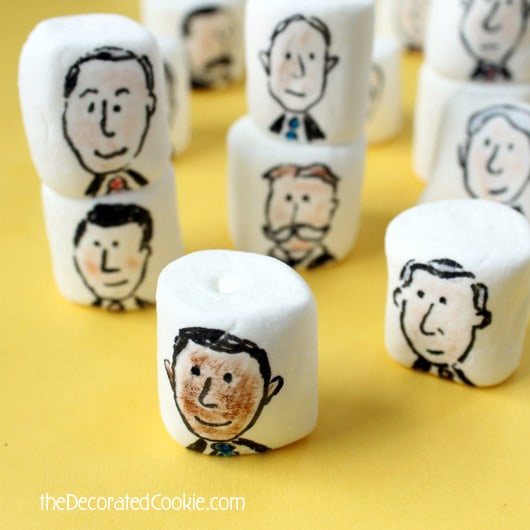 For tips on how to make marshmallow art with food decorating pens, CLICK HERE. 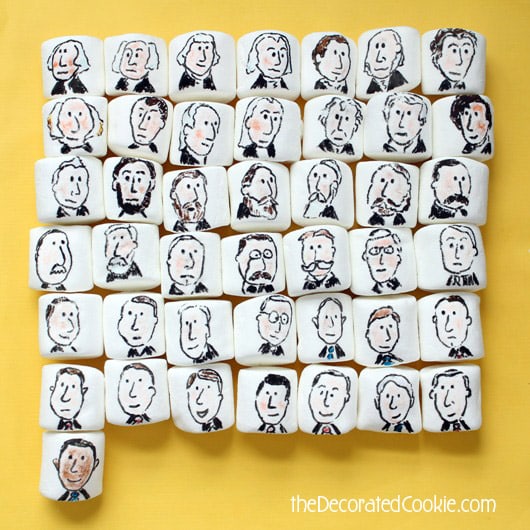 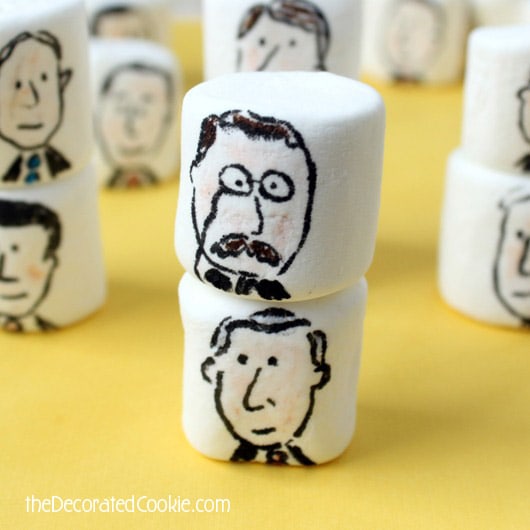 UPDATE: Since writing this post I learned that Angelica Singleton, daughter-in-law to Martin Van Buren who assumed the role of First Lady for her deceased mother-in-law, is a distant relative of my husband’s. Neato, as they say. That’s Martin below. 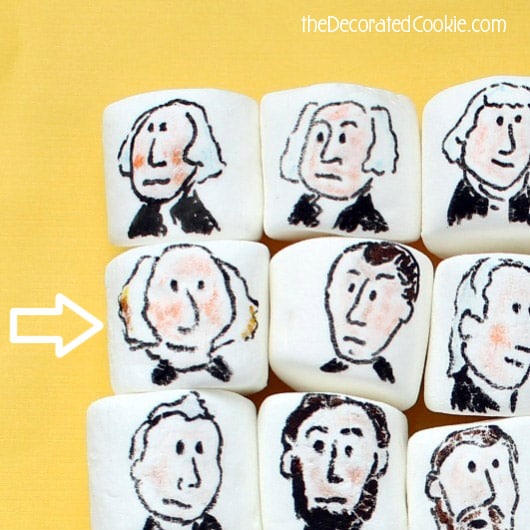 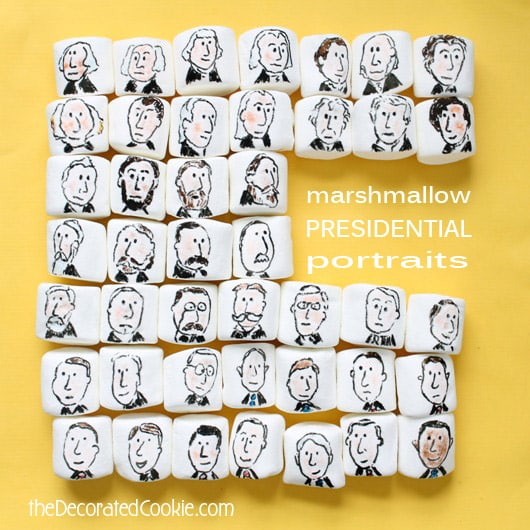